First, thank you to everyone who entered last week’s giveaway for the SACurve Pattern Drafter. The lucky winner is Janet Williams! She’ll be getting the 5/8″ Pattern Drafter, which I hope she’ll find useful for adding seam allowances to patterns without them, adding stitching lines to patterns that already come with 5/8″ seam allowances, and drawing curves with the built-in French curve.

For everyone else who’s still interested in their own Pattern Drafter, you can get 20% off anything in the SACurve Etsy store from now until June 21st using the coupon code SEWWELL2015! 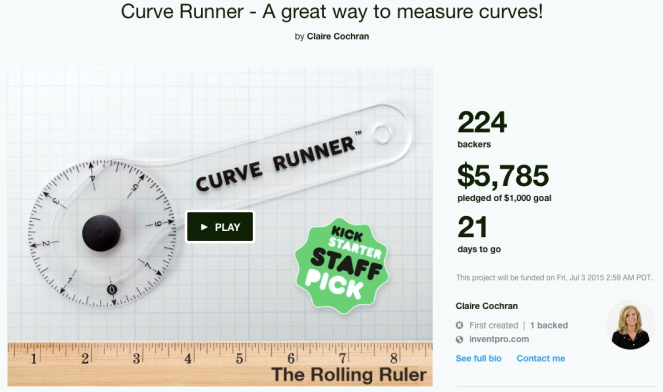 And, just a reminder that the Curve Runner Kickstarter is still going on. There are three weeks left, and Curve Runner is well past its initial $1,000 goal and over half way to its $10,000 stretch goal! It’s even been chosen as a Kickstarter staff pick!  Woohoo! I am so excited it’s done so well in its first week, and I really hope the momentum continues since I’d love to see the outcome of the stretch goal come to fruition – the development of a 12″ Curve Runner! If you are thinking about getting a Curve Runner as part of the Kickstarter, you should know that all of the $16 early bird specials have been spoken for, but you can still get a single Curve Runner for $20 or go in with a friend and get two Curve Runners for $35. Or, if you just want to help out, you can do so by donating as little as $1.

Have a great day, everyone!  Don’t forget you can get 20% off anything in the SACurve Etsy store from now until June 21st using the coupon code SEWWELL2015!