When I moved out to California for graduate school, I took with me my Grandmother’s old sewing machine.  It was one of those Singer machines built into a small wooden table.  It even had a matching stool.  My parents sent out a manual, a how-to book, and some of my Grandmother’s old sewing supplies,  but I never found the time to put any of it to use.  Instead, I used it as a foyer table in one apartment and a makeup table in another apartment.  In yet another apartment, there just wasn’t room for it, so I stored it in a secure basement owned by the housing department of my graduate school.

One spring day in 2008 I got an unexpected phone call.  A lady from the housing department asked, “Amy, we were wondering if you still wanted your sewing machine?”

“Yes,” I replied, “I will be taking it out of the storage this summer when I move.  Why?  Is there a problem?  Do you need me to move it now?”

They said all was fine.  But, when I opened the storage unit that summer, no sewing machine was to be found.  I had the housing department take me through all of their storage units, hoping that it had just been moved on accident.  But, it never showed up.  To this day, I still have no idea what happened to it.

My theory is that a nearby bookshelf fell on it when the housing department was moving out their big items, breaking the table.  Maybe they intended to fix it after calling me to confirm that I still wanted it, but then they never got around to it.  My big fear is that they finally did fix it, which would mean that the sewing machine is now back in the storage unit waiting for me.  Since I made such a fuss about the sewing machine during the summer of 2008, I won’t let myself call the housing department to ask if it was ever found.

Fast forward a year and a half.  Though I had never used it, I still missed my sewing machine desperately.  I mentioned it enough to my parents that they surprised me with a new Baby Lock sewing machine for Christmas 2009 from Eddie’s Quilting Bee.

New sewing machines from Eddie’s Quilting Bee come with free classes, the first of which is on sewing machine basics.  During the class we essentially went through the manual using a variety of fabrics, buttons, and two brightly colored threads so that we could see how the machine stitched.

When I got home, I started my first sewing project:  curtains for the bedroom.  I had some old curtains that I needed to hem much shorter to fit the windows of my new apartment.  One of the many tricks I learned at the class was the blind hem, and I used it to make the hem on the bottom of the curtains.

Over the past year, I’ve continued my sewing and crafting.  I love my new sewing machine, but I’ll never forget that old Singer, whose inadvertent disappearance led me to finally begin this wonderful hobby.

7 thoughts on “From History to Hobby (and Curtains)” 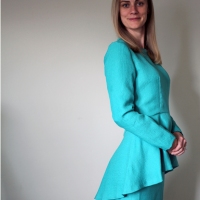 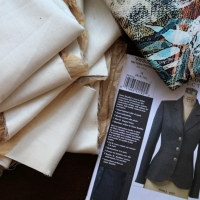