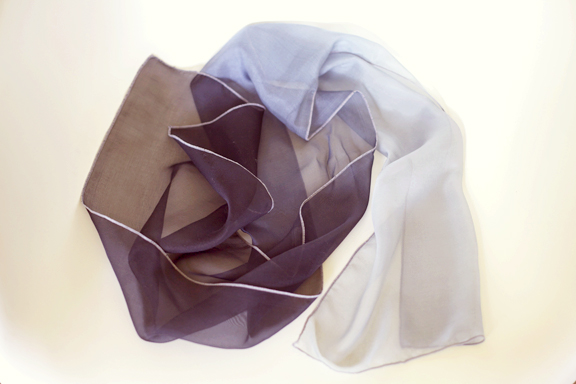 A month or so ago I got an itch for a serger. I was never happy with the running skirt that I made on my straight-stitch machine, I want to make a collection of Renfrews, and I was curious about the seam finishing possibilities.

I researched online and then went into my local sewing machine store to see just how much a serger cost. Oh my. A serger was not in my budget. When I couldn’t shake the bug, I decided to look on Craigslist. I found a perfectly good serger for just outside my budget. I debated whether it was wise to buy a used seller. Twitter advised against it. But, I ultimately broke down and emailed the seller to ask if they were willing to negotiate. Within half a day, I was the proud owner of my very own BabyLock Eclipse LX (sparkly-skinned vampires not included). It came with all kinds of goodies that the former owner didn’t need anymore. Little Gingher snips. Needles. Bobbins. Thread. And, it was already set up to do a nice three-thread rolled hem. From what I could tell, the former owner had last (only?) used this serger to make a nice edge on napkins. It got me to thinking about the ombre silk I’d bought ages ago from FineFabrics.com that I wanted to turn into scarves. I’d tried hand rolling the hem, but I was never quite happy with the results, especially for the time it required. I’d also tried using my narrow hem foot, but I found it hard to control the edge of the fabric, even with lots of starch. The lightbulb went on. What about doing a rolled hem with the serger?

I bought some silver thread: two spools of regular serger thread and one spool of wooly serger thread. After reading the manual and doing a little bit of practice, I decided I actually liked the two-thread rolled hem. And, away I went.

I snipped the fabric every 12″ along the selvedge and then ripped it into strips so that each would be on grain and the same width across.  No parallelograms here. Because of the ombre coloring, the silver pops on the black half of the fabric and fades into the silver half.  I thought a silver edge on the black would be more elegant than a black edge on the silver, and I imagine either would have been just fine. 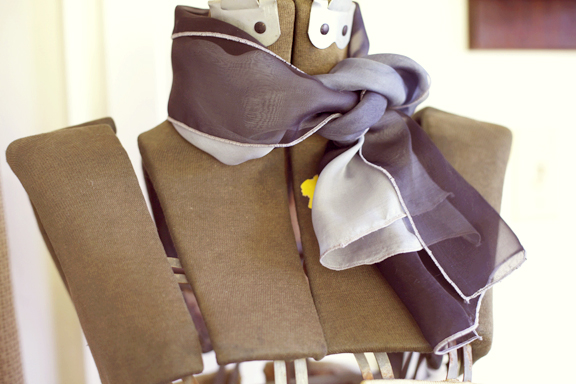 These scarves are meant as gifts for the friends who spent a weekend with me in Sonoma for my bachelorette party.  Two years ago.  They can’t yet be sent out because I also want to make clutches for each of them.  But, then they will be sent out.  Better late than never, right?

There are three colorways still available if you’re interested in making your own:  yellow, blue, and purple.  A quick and simple gift for anyone who likes scarves.  And, if you can figure out hand rolling, let me know! 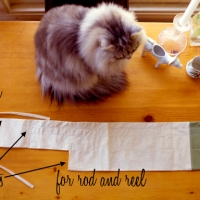 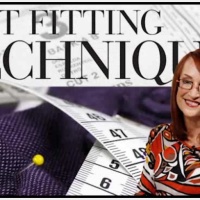 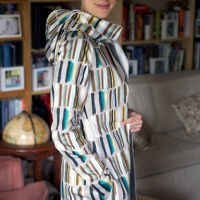