Jamie Lau, one of the authors of BurdaStyle‘s newest book Sewing Vintage Modern

, actually wrote to ask me if I’d make a dress from her book before asking if I’d review the book itself.  Of course I jumped at the opportunity, even though at that point I only knew that the patterns were classic designs from different eras in the 20th century.  Jamie explained that my choices of patterns were a 1920s drop-waist dress, a 1940s men’s shirt, a 1950s gathered-waist dress, or a 1960s stirrup pant; she also let me know that I was free to modify the patterns as I wished.  I ended up choosing the drop-waist dress since I’d been intrigued by the 1920s style ever since I learned about the Gatsby-themed party that happens each year here in San Francisco.  Jamie sent the pattern right over.

It was only after I’d started the pattern that she asked me if I’d review the book.  The offer came at the perfect time – I was just trying to plan my modifications, and I was eager to see what had been done in the book.  The Louisa Drop-Waist Dress actually only has one major modification described in the book:  the 1960s Jackie Dress (seen here and here).  I wanted to stick with the 1920s style though, so I passed Jackie up and starting toying with simple modifications.  First, I contemplated making a V neck line, but then I didn’t want to lose any of the beautiful watercolor flowers on the silk charmeuse from Mood that I bought for this project with my Mood Sewing Network allowance.  I also debated turning the skirt into a single tier, but I decided against that idea because of the fabric yet again.  I liked how the tiers played up the silk’s abstract print.

Ultimately, I didn’t make any big modifications to the pattern.  I did swap the facing-lining combination for a full lining and the belt for a row of feather trim along the top tier (similar trim in brown here).  Simple little changes that were again guided by the fabric.

All in all, I couldn’t be happier.  The pattern and fabric came together into a great dress.  I love how the silk shimmers and dances through the tiers as I walk.  I finally have the 1920s-style dress that I’ve coveted – one with a very “vintage modern” attitude.

If you guys live in or near Brooklyn, Santa Cruz, or San Francisco, check out the upcoming book launch parties this week and next.  And, give a hug to Jamie for me!

This post can also be found on Mood Sewing Network and BurdaStyle. Though I also mentioned it in the text above, I used my MSN allowance towards the purchase of the fabrics, and I received the pattern and book for free from BurdaStyle.

18 thoughts on “Watercolor, Feathers, and a Drop-Waist Dress” 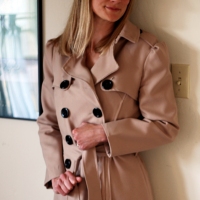 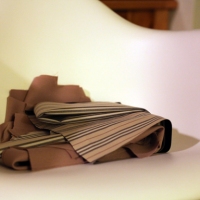