Laurence King Publishing is at it again with yet another English translation of the fabulous Drape Drape series.  This time our treat is Drape Drape 3.

The book is organized the same as the other Drape Drape books.  The beginning is filled with information about the fabrics, sewing techniques, and draping techniques that are used for the patterns included with the book.  And, yes, when I say included, I do mean included.  Multi-sized paper patterns for all 15 of the garments you see in the book are found in the back – though you do have to trace them off of a large, nested sheet.

When I was browsing through the book trying to decide which pattern I wanted to make, I found quite a lot with interesting details that I was excited to try out.  See the gathered skirt in panel marked 3 above?  It is quite the attention catcher, and it’s part of a V-neck dress, a style I’ve recently realized I quite like.  The panel marked 5 above is a long-sleeve T with a really cool twisted drape at the hip.  Finally, the neckline and overall drape of the dress in panel 6 above is stunning.

Meg of Meggipeg has made a really cool version of this dress, only she added a second sleeve.

I want to make this just so I can wrap my head around that twist at the hip line!

My ultimate choice though was none of the patterns I’ve shown above.  I was really focused on using a bit of Cavalli print from Mood that I thought would look elegant draped into a lot of folds, like what you see in the skirt in panel 4 way above.  I actually would have gone with that skirt, but its draped piece is not faced, and I worried that the back of the jersey print fabric (which is almost white!) would peek out too often.  After much deliberating, I chose pattern No. 3, the three-piece cowl-neck top.

The deep cowl gave me the folds I was looking for, and I realized I should actually get more use out of a top like this one than I would have out of the skirt. I imagine wearing it with skinny jeans for a night on the town, with a black pencil skirt for a fancy occasion, or over a bathing suit for a day by the pool. 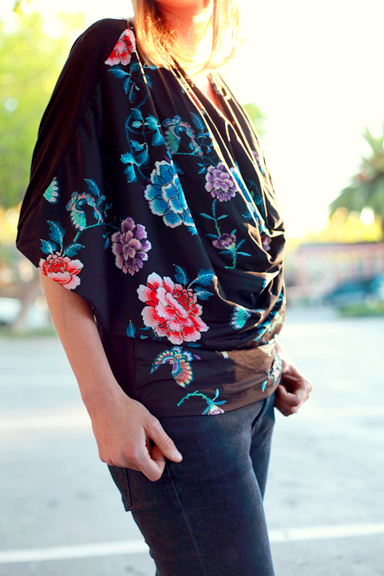 Since the back doesn’t have much draping, I chose to use some of Mood’s solid black jersey instead of the print.  I also used the same solid black jersey for the cuffs.  The whole top came together relatively smoothly in a few short hours on a lovely Sunday, thanks in large part to the fact that I was able to serge almost every seam!  Quick makes are so satisfying.

That said, the jury is still out on this top.  It feels fabulous while it’s on.  When I look at it in the mirror, it feels quite elegant with the glittery roses peeking out amongst the folds.  When I ask my husband what he thinks, he also uses the word “elegant”.  But, many of the photos my husband and I took together looked like I had just thrown a lot of fabric over my shoulders (see below, for example).  My hope is that I’ve just had a second lesson on how hard it is to photograph something black and that the top really does look as fabulous as it feels like it does.  I’m going to have to get a few more real life opinions though before I reach a solid verdict.

Regardless, I really enjoy how these books teach me about how fabric hangs and moves.  You can see below how the drapes all hang from the shoulder while the bulk of the shirt actually fits closely. 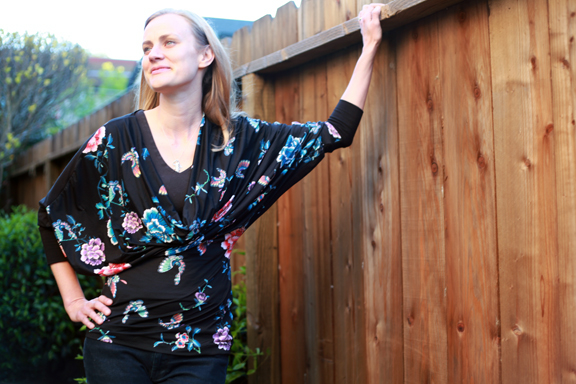 And, how it catches the wind!  (It was so windy the day we took these photos!) 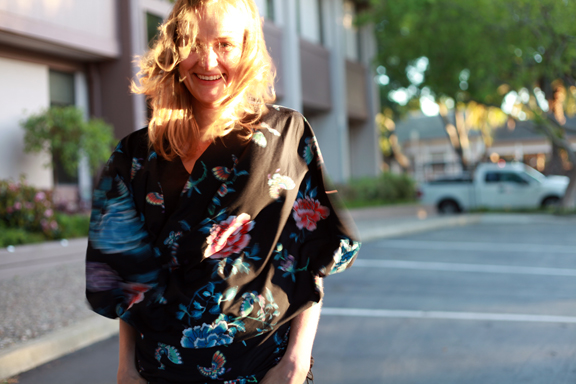 Now for the best part – the giveaway. Laurence King Publishing has agreed to give away an additional copy of the English version of Drape Drape 3 to one of my readers. If you’d like to be entered into the drawing, just leave a comment below letting me know. I’ll pick a winner at random next Thursday, April 25th at 7 am PDT. Good luck!

As an aside, I really have to thank Laurence King Publishing for continually going above and beyond to make great sewing books accessible to a wide audience.  They have not only translated the Drape Drape series, but also the Pattern Magic series and several other coveted fashion books.  And, so far they’ve been very generous in their giveaways!  They’re definitely a company to keep an eye on!