I realized this past week that I hadn’t posted about one last completed project from the sewing class that I was taking at Eddie’s Quilting Bee (as a reminder, three years of classes came free with the purchase of my machine).  I actually put the finishing touches on this tote after the class, and then in the move it got tucked away.  I found it as I was digging through the box of patterns that I’ve still yet to unpack (looking for anything that would accommodate an expanding belly!), and I decided to pull it out and use it to keep my sewing supplies organized this past weekend when I headed to Denise‘s house for the second Seattle seamsters’ fitting session.

The pattern we were supposed to use in the class was the Sewing Tote by Karla Strauss (that link will take you to a pdf of the instructions).  And, if you’ve been keeping up with my Eddie’s Sewing Class posts, you can probably guess that I deviated from what everyone else was doing.  I never made that class easy, right?  If you’ve already clicked through to look at the instructions, you’ll notice that the actual pattern has three sections, one with a long fabric pocket and a button hole, one with two rows of elastic for holding thread, and one with a large mesh zippered pocket.  Mine has three mesh zippered pockets and nothing else, it rolls up into fourths instead of thirds, and it closes using ties.

So, yeah, it’s basically the same tote, but it’s different.  My changes were based around the materials I had on hand and how I thought I’d use the bag.  From three mesh bags I had previously made, I had several narrow strips of mesh left over, each about a fourth of the width of the sewing tote.  I was trying to figure out how to make the most use of them since I liked the idea of see-through zippered pockets better than the fabric pockets or the elastic.  When I was laying out the mesh on top of the cut shell fabric, holding it this way and that, inspiration struck.  I ran downstairs to the main floor of the store and grabbed two extra zippers, turned them all vertically, and this sewing tote was born.  (I did get several comments during class that my zipper was going the wrong direction through!)

A close-up of the mesh used to make the bag.  I really like this stuff!

I decided to make the left-most zipper open to a double-wide pocket. 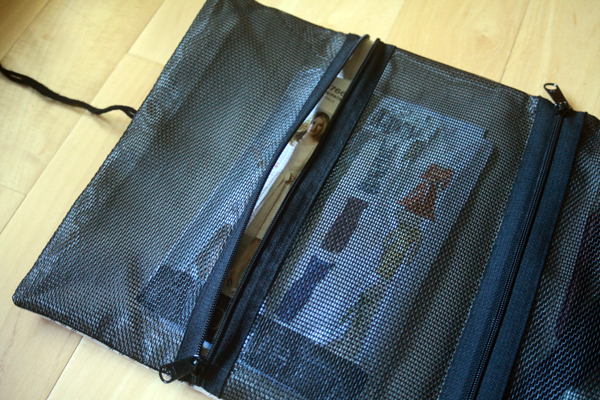 And the center and right zipper each open to a narrow pocket.

Most of the rest of this project also came from my stash.  You can’t see it very well, but I used one of the fabric’s I picked up from FabMo for the lining.  The outer fabric is from the same bolt of Burberry rainwear that I’ve been using since my wedding.  It’s been a part of so many projects:  wedding welcome bags (that are still used by many of our friends and family!), small and large Frenchy bags,  one of the mesh bags linked to above, a set of Stash and Dash bags, a pincushion (a bad choice since it’s so thick pins don’t like to go through it!), and the lining of my trench coat (another less than ideal choice since it’s not slippery or thin like most linings!).  The yarn I used for the ties was left over from quilting the sleeping quilt I made in 2011.  And, the button also came from my stash.

I keep it closed by just wrapping the ties around the button.  Quick and easy.

The whole thing folds up pretty compactly despite being four layers.  At least it does when it’s only carrying a pattern, my Sew the Perfect Fit class notes, a pair of scissors, a seam zipper, a small package of pins, and some elastic.  We’ll see what it looks like when I need a large sewing arsenal at my disposal.  I might be wishing I made the ties longer! 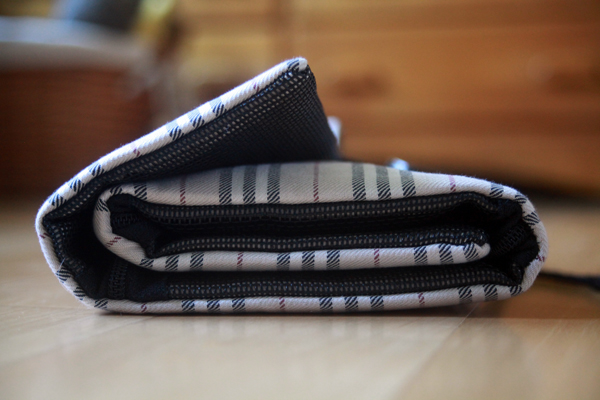 And, the cats were finally curious enough about this project to come by and give it a sniff. Wiley was too quick for me to get a photo, but I was able to catch Maya. It’s been too long since the cats have made it onto the blog! 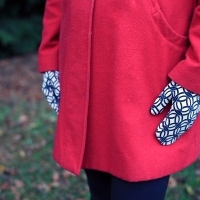