Yesterday’s post probably clued you in to what was coming next. Though I’ve chosen to make super sporty Avocado Hoodies, I think these versions live up to their Disparate Disciplines’ Date Night theme since my husband and I are the kind of people who think honeymooning in the Alps is about the best thing ever.  Plus, any outing in a skirt like this one must be a date, right?! 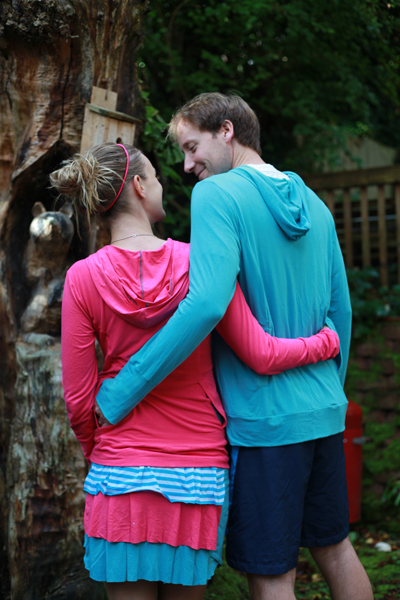 I’ve been curious about bamboo fabric ever since my husband came home from a Search and Rescue team meeting one day back when we were in graduate school and told me that everyone on the team was switching to socks made out of bamboo because of the natural anti-bacterial properties of the fabric. (If you’re curious, his Search and Rescue team was an amazing group of volunteers that would get called out into the wilderness when people would get lost or injured while hiking or otherwise galavanting in the great outdoors.) I don’t talk about it much here, but I’ve been a competitive runner since high school and love being outside.  Almost every morning starts with a run, and if I had my way, every weekend would involve some time on a trail.  Having athletic gear made out of a fabric that would naturally fight off odors sounded fabulous.  But, years passed and nothing made of bamboo made it into my running gear. 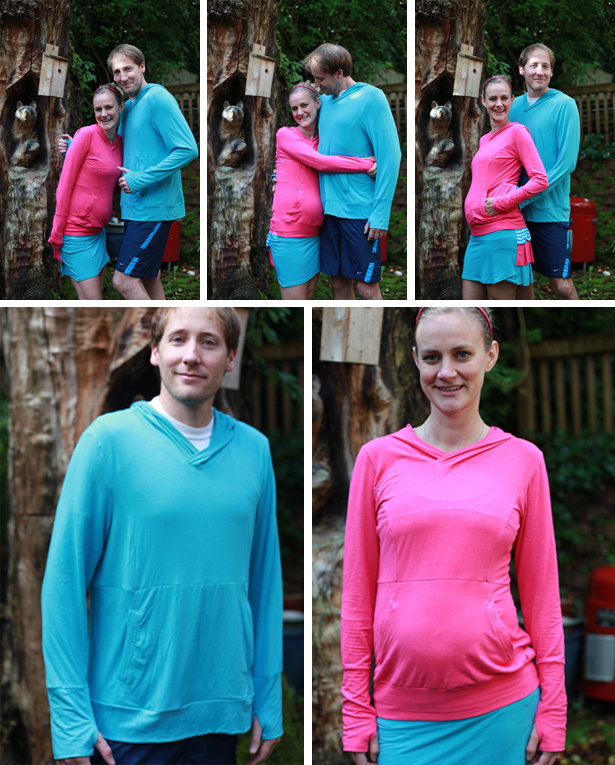 Well, that is until I found Mood Fabric’s selection of bamboo jerseys.  To start off I chose two fun colors, hot pink and pale blue, since I like to be visible when I’m on the trail and since I knew I wanted to make something for both me and my husband.  The pattern choices were easy, too.  I’d received the Men’s and Women’s Avocado Hoodie patterns from Disparate Disciplines for backing the new pattern company’s Kickstarter campaign, and I’d been eagerly awaiting cooler months in order to try out the design.  I also made a coordinating running skirt for me from Jalie 2796. 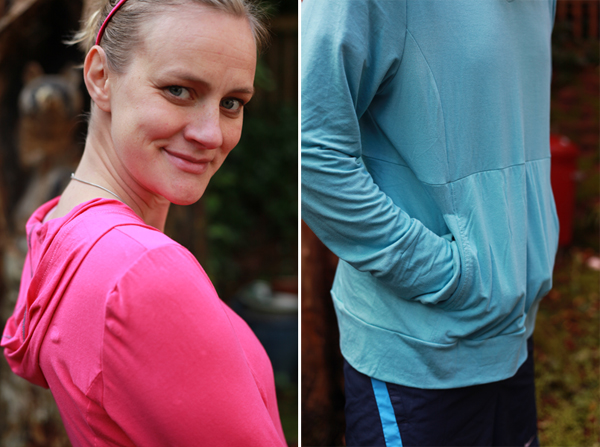 The Avocado Hoodie pattern not only comes with a hood, but also comes with a large kangaroo pocket in the front that wraps around to the back to also give your partner somewhere warm to put their hands when you’re walking with your arms around each other.  The pattern seems to run a teeny bit large, at least based on the fact that it still fits me pretty well despite cutting out my pre-pregnancy size and the fact that I cut my husband’s button-down shirt size and he has plenty of room for layers underneath.  But, the sizing could seem large because of the awesome stretchiness of the bamboo jersey.  This stuff is soft and pliable and just all kinds of awesome.  That said, I might just have to make my next version out of this Thakoon sweatshirt knit to test my sizing theory.  Anything for the sake of science, right?!  Regardless, I think my husband and I are both quite happy with the fit, even if it is a bit looser than some of our other athletic gear.  Plus, it’s bamboo, and we’re excited to see if these hoodies live up to my husband’s former team’s anti-bacterial hype. 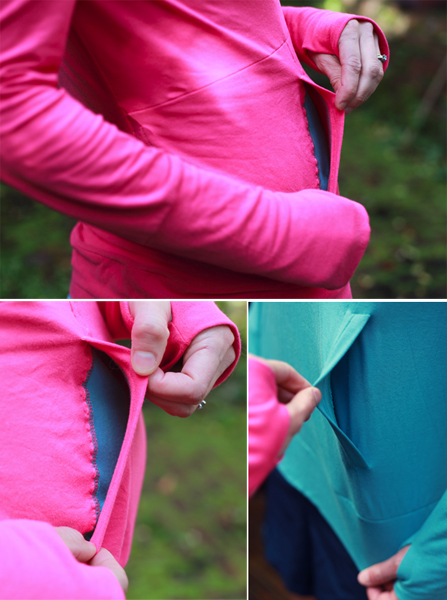 I chose to line my pockets with the pale blue bamboo jersey as a fun little surprise.  My husband’s version was made blue through and through.  On both hoodies I serged all of the exposed edges using a blue thread to continue the theme.  It adds more fun to mine while being more subtle on my husband’s.  The kangaroo pocket is designed to be one big pocket that wraps most of the way around the hoodie, but I decided to break the continuity by stitching the front pocket down to the pocket lining.  Though the back pockets end up being much smaller that way (though still large enough for your partner to keep their hands warm), it helped to keep the front pockets from gaping open when stretched over my baby bump.  I also hand stitched down the sides of the pocket tabs so they’d stay neatly in place as well. 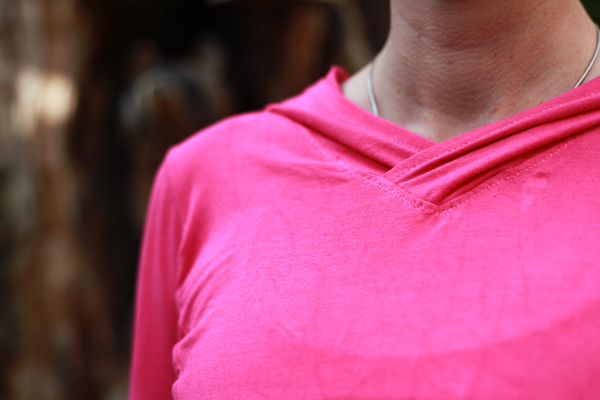 I found it pretty easy to work with the bamboo jersey, which gave me the confidence to topstitch around the neckline to hold the hood in place instead of using the pattern’s neckline facing pieces. 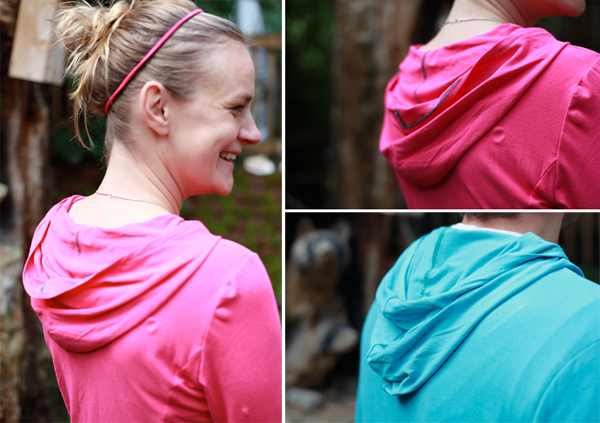 I love hoodies, even if I rarely use their hoods.  It’s just fun to have a hood.  But, who knows?  Maybe I rarely used hoods in the past because I lived in sunny, warm California.  Perhaps Seattle’s seasons will  teach me that hoods can actually be functional!  The pattern doesn’t call for these hoods to be lined, so I just serged the center seam.  I also serged the edge of the hood before I turned it under and hemmed it.  I like the way the blue thread jumps out again against the pink fabric but almost disappears against the blue fabric.  Also, you can really see the lovely drape of the bamboo jersey in the hood. 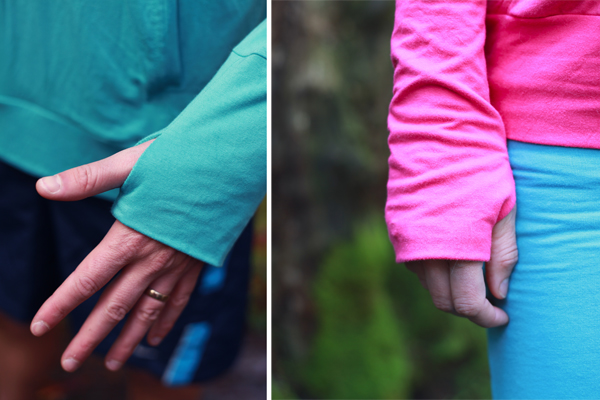 One final cool feature of this pattern is the thumb hole engineered into the sleeve cuff.  All of my favorite long sleeve running shirts have thumb holes, and I’m really excited to now know how simple it is to make nice, neat thumb holes in cuffs.

Now on to the skirt… 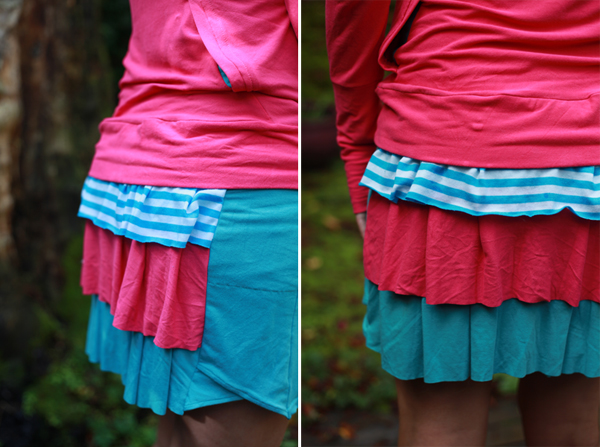 I’ve made this skirt pattern once before, back in my pre-serger days.  Even though Jalie gives detailed instructions for how to sew seams without a serger, I’ve been dying to make it up again ever since I got my serger.  I knew I wanted to make it in a larger size (since round one looked more like a mini skirt than a running skirt!), and ever since I was introduced to Lululemon’s pleated running skirts, I’ve wanted to try adding pleats to the back as well.  Since I had some left over bamboo jersey, I figured it was meant to be!

Everything came together quickly.  As with the hoodies, I used my serger everywhere I could and my sewing machine everywhere else.  The jersey cooperated perfectly with both machines.  I added the pleats exactly the same way I added the shingles to my ombre striped jersey dress.  Since I had no pattern pieces for the pleated layers, I just cut really long strips of fabric, each about 5″ wide.  For the bottom layer I used the blue to give continuity with the hemline on the sides and the front of the skirt.  For the middle layer I used the pink since I thought it would be fun and nicely tie the skirt in with the top. For the upper layer I used a leftover scrap of the cyan stripe from my ombre striped dress.  I like the little bit of pattern that it adds.  Though the skirt itself is turned under and hemmed, I left the edge of each pleated layer raw. 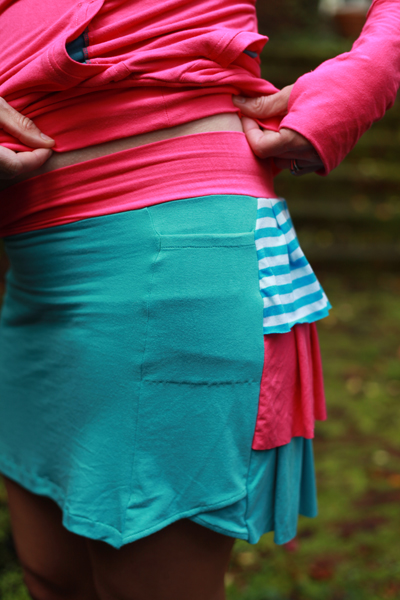 The skirt sides are designed to have functional pockets that actually keep things in thanks to a bit of 1/4″ elastic at the top.  Finally, to add to the color blocking crazy, I made the waistband (and bloomers underneath!) out of the pink bamboo jersey.  This running skirt is bright, colorful, and fun! 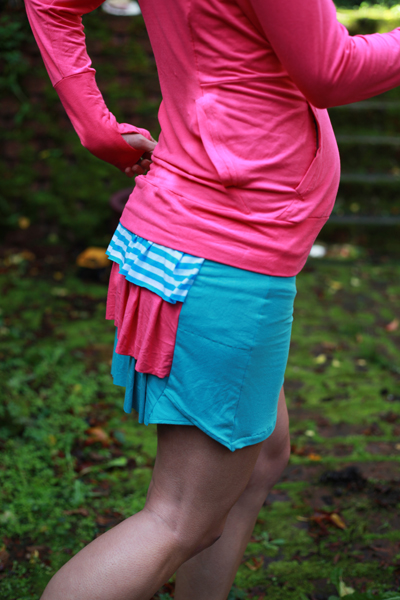 I’m excited to get out there and explore the roads and trails around Seattle.  Now if only I could find my pre-pregnancy energy levels! 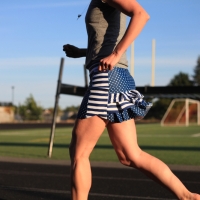 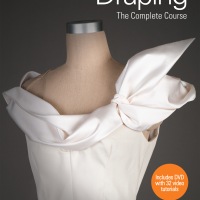 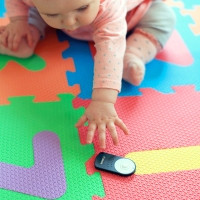 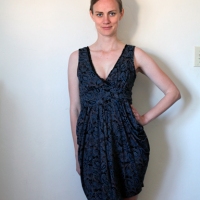