It seems like ever since I started sewing, I’ve had a ton of friends having babies.  And, because I was introduced very early on in my sewing career to the Cotton Ginny’s Animal Blankets and Ball pattern through the sewing classes that came with the purchase of my machine, nearly every single one of those friends got one of these blankets.  I started with the pattern’s bear, elephant, and hippo blankets, making many, many multiples of those, and then I ventured out into cats, giraffes, unicorns, and dogs.  One year I counted eleven blankets made.  But, it’s been awhile since I made one of these baby blankets – well over a year, in fact.  My friends kept having babies, but the focus of my sewing changed to almost exclusive garment sewing (with a small craft binge here or there) after joining MSN.  Yet, these blankets take almost no time to make, so I’ve really had no excuse!

I figured it was time to break out the minky again and make one for my impending arrival.  The animal of choice this time around was a dragon.  A green dragon.  Green felt neutral, and whether I have a boy or a girl, I hope they’ll grow up to think dragons are pretty cool. 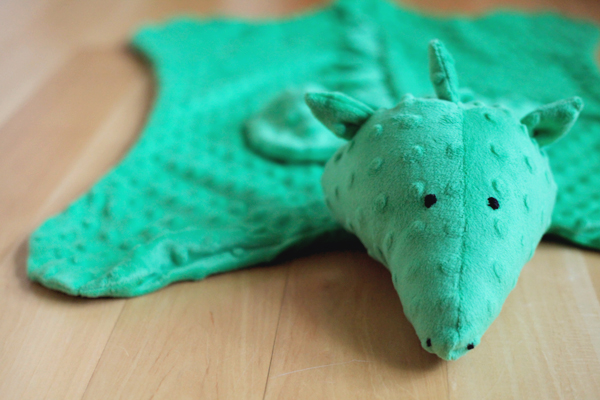 I mean, look at that face!

for the July Block of the Month Dresden plate class came in super handy as I turned ridge spike after ridge spike.  Also, would you believe these wings are my first ever scallops?  Somehow I got by without making anything with a scallop a few years ago when it felt like scalloped hems and necklines were all the rage in the sewing blogging world. 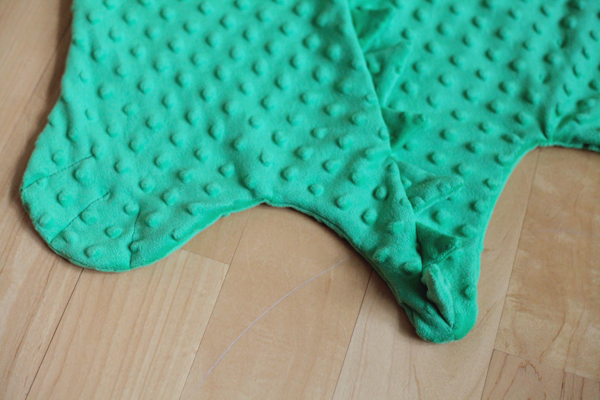 The tail was also drafted on the fly and was mostly based on the yardage of minky I had on hand.

Now all that is needed is a bit of patience.  The dragon’s happily waiting, and I’m trying…  But, seriously, come on, baby!